We purchased a couple more Cisco B200 M4 blades specifically to run Microsoft SQL locally. That might sound a little old school, but we’re finding out that virtualizing all of our SQL servers is not practical. Therefore, I am, for the first time, attempting to build Windows Servers that boot from SAN. I eventually got it all worked out, which means another riveting blog entry for my seven readers. In fact, when I told one of them that a new post was in the works, the reply was “A shorter one then?” Sigh.

After the blades were ack’d by the chassis and online it was time to build UCS service profiles for bare metal Windows servers rather than VMware ESXi hosts. There is one important difference: The vNIC Failover Choice. Thanks to Brad Hedlund’s blog that verifies the UCS failover procedure. Set up the vNICs with UCS failover as the MAC addresses will be replicated to each Fabric Interconnect in case of failure. 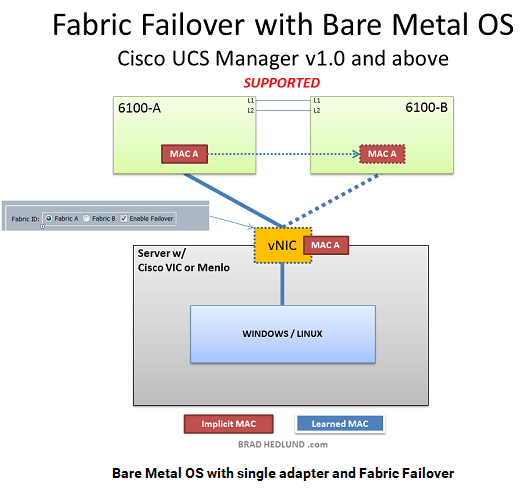 Once the service profiles are associated, the MAC addresses for the blade’s vHBA cards will appear. Set up the zoning on the FC switches and map the blades to the boot LUNs. I won’t be covering these steps as our infrastructure is probably different than yours. You can verify if the blade has FC connections during its boot process as it will error out if there is a connection problem.

Now the fun part as we combine a Cisco blade and Microsoft Windows 2008 R2. Yay.

When Windows is installed and logged into the first time you’ll see a ton of unknown devices, including the Ethernet Controller.

Like any other bare metal server, all the drivers are missing. So, back to the Cisco drivers ISO. Reload it back into the Virtual Media of the KVM session.

Load the ethernet controller drivers first as the chipset install may need to pull down Microsoft .NET 4.5 to install its software. Once you load the chipset drivers, the Windows server is set to roll.

See, it WAS a shorter post than the last one.

Every cloud has a silver lining.

A Digital Foundation, Edge and IoT, Storage, and Virtualization Blog

From The Core To The Cloud

Your P.I. on virtualization

That IT Guy's Blog

Phoenix-based IT guy with too much to say...